GLWS at the WGS: Part two

In last week’s edition of Wellbeing Insights, we shared the context for the World Government Summit (WGS)’s focus on wellbeing and happiness.

In today’s article, we’ll bring you the best bits from two keynote presentations and share the implications for leaders and workplace wellbeing:

We’ll continue to bring you more highlights from the WGS as part of Wellbeing Insights this year, so watch this space ☺️

The executive chairman of the World Economic Forum set the tone for the event with a keynote on the Fourth Industrial Revolution (4IR).

Professor Schwab explained how a fusion of emerging technologies across a number of fields are blurring the lines between the physical, digital, and biological spheres, and disrupting almost every industry in every country. He specifically mentioned:

He described how the global system is “in danger of spinning out of control” due to three stress factors: the speed of technological changes due to 4IR, a new wave of populism and the potentially devastating impact of climate change.

He shared some statistics and predictions that were equal parts thrilling and frightening:

To be frank, the implications for humanity are mind boggling. Here’s why we say this:

More than a third of all leaders say they are ‘always or usually racing against the clock’, ‘pulled in too many different directions’ and ‘compromised by too many competing demands for their attention’.

Like the science deniers and disbelievers for climate change there’s a similar risk of ignoring this real and pervasive threat to our wellbeing as a result of unprecedented level and rate of change our environment. Our brains are made up of neurons – living cells with a metabolism that need oxygen and glucose to survive. When they’ve been working hard, we experience fatigue. Every status update you read on Facebook, every tweet or text message you get from a friend, every email, very phone call, every meeting and report is competing for resources in your brain.

Just as our bodies get tired and inflamed when overused, so too do our brains. But unlike the body, we don’t have the same nerve receptors in the brain and damage remains hidden for far longer. But brain fog, anxiety, depression, memory loss etc are all code for brain inflammation.

Notes from ‘The Evolution of Leaders’ by Tony Robbins

The legendary life/business coach and author Tony Robbins was next up. It was fascinating to watch him deliver his craft to an audience of critically evaluative scientists and cautious diplomats. Apparently, he hates being referred to as a motivational speaker, but he was certainly using NLP tactics to pace and lead his (reluctant and evidence-based) audience, trying to rev them up to participate. He had his work cut out.

The gist of his session was that three decisions shape our life and our success as a leader:

This led to an interesting assertion about momentum creation. Robbins passionately believes creating energy is the most important aspect of change—he says it’s the differentiator and that ‘execution trumps knowledge every day of the week’. He encourages all leaders to reflect on how their minds work when they are in high versus low energy states. 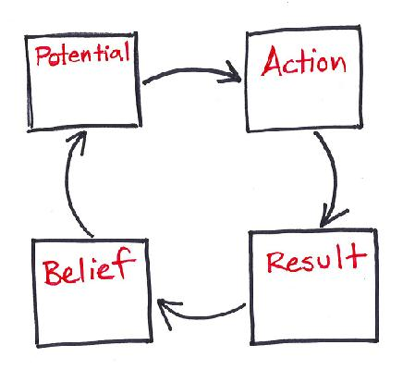 Robbins’ view is that leadership is not about changing potential, it’s about changing peoples’ values, so they keep doing things when you’re not there. A key message was that creating energy is all about psychology. Most peoples’ results are less than they are capable of, so a leader’s job is to close this gap.

Robbins talks about our ‘state’ as being a combination of what we choose to focus on and what we do with our physiology. It begs the question, what state are we in when we are at our best?

He says we can identify our state by what we are doing with your body and that what we do with our body affects our state. Our biology triggers to change our state. When posture is up, volume is louder, pace is faster, and we’re breathing fully, it changes the way we feel.

Our interpretation of Robbin’s theory, expressed in GLWS terms is our advice to encourage leaders to reflect on the extent to which they ‘make an effort to change the aspects of their thoughts, feelings or behaviours that are unhelpful’ and ‘think about their intentions and how they want to ‘show up’ each day’ for others.

What do you think? Have you seen Mr Robbins in action or read any of his books – any other angles or comments on his theory about how leaders need to evolve by focussing on momentum creation?

That’s all for this week—I feel like I’m back in Dubai!

Next week I’ll be bringing you my notes from a fascinating session with three huge names: Arianna Huffington – Founder, Thrive Global (and she might have started a media empire or something like that); Professor David Clark – University of Oxford, Chair of Experimental Psychology and the famous Dr Oz sharing ideas on ‘Mitigating the Risk of the Next Global Epidemic’; as well as the very latest in innovations in the future of personalised medicine and healthcare.

If you are a leader, or a coach working with leaders, you can find out how the GLWS works in practice by reviewing our suite of reports. Sign up here to get instant access.